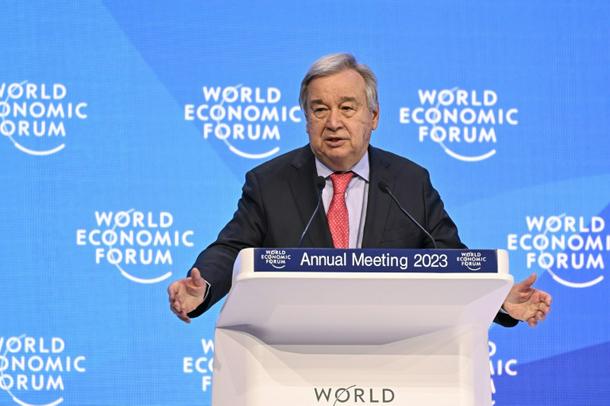 Davos (Switzerland) (AFP) - UN Secretary-General Antonio Guterres skewered oil firms on Wednesday for having “peddled the big lie” about their role in global warming, telling the World Economic Forum that they should be held accountable.

Addressing a room full of the world’s business and political elite, Guterres drew a parallel between the actions of oil companies and those of tobacco companies that have been hit by huge lawsuits over the adverse effects of cigarettes.

“We learned last week that certain fossil fuel producers were fully aware in the 1970s that their core product was baking our planet,” Guterres said.

He was referring to a study published in the journal Science that said ExxonMobil had dismissed the findings of its own scientists on the role of fossil fuels in climate change.

“Just like the tobacco industry, they rode roughshod over their own science,” Guterres said, referring to lawsuits that determined cigarette companies had hidden the dangers of their products.

“Some in Big Oil peddled the big lie. And like the tobacco industry, those responsible must be held to account,” he said.

In 1998, US states won a landmark settlement against tobacco companies worth $246 billion aimed at recovering the costs of treating smokers from the harmful effects of cigarettes.

The study on ExxonMobil found that the firm’s scientists had modelled and predicted global warming “with shocking accuracy”, only for the company “to spend the next couple of decades denying that very climate science”.

ExxonMobil is the target of a number of lawsuits in the United States.

Asked about the Science report, an ExxonMobil spokesman said last week that the issue had come up several times in recent years and in each case the company’s answer was that “those who talk about how ‘Exxon Knew’ are wrong in their conclusions”.

In his speech, Guterres urged the world to “end the addiction to fossil fuels” and warned that the aspirational goal of limiting warming to 1.5 degrees Celsius (2.7 degrees Fahrenheit) from pre-industrial levels was “going up in smoke”.

“Fossil fuel producers and their enablers are still racing to expand production, knowing full well that this business model is inconsistent with human survival,” he said.

“This insanity belongs in science-fiction, yet we know the ecosystem meltdown is cold, hard scientific fact,” Guterres added.

Asked if oil firms should be held accountable like tobacco firms, US climate envoy John Kerry told AFP he was “not looking right now for similarities or differences”.

“The first thing I would like to see right now is for the oil and gas companies to be joining with other critical companies, many of them here who are working diligently to try to address the climate crisis,” he said.

“We need oil and gas companies at the table to help do that,” Kerry added.

“Every piece of pro-climate legislation at the national level, regional level, the local level, municipal level, the oil and gas industry and the coal industry come in and fight it tooth and nail,” he told a panel.

“They use their legacy network of political influence and wealth to stop progress,” he said.

Guterres also called on business leaders to provide by the end of the year “credible and transparent” plans on how to achieve net-zero emissions.

He urged them to act based on recommendations published by UN experts at the UN climate summit in Egypt in November, which said firms could not claim to be net-zero if they invested in new fossil fuels, caused deforestation or offset emissions with carbon credits instead of reducing them.

Guterres also noted that the benchmarks and criteria in corporate pledges are “often dubious or murky”, which can “mislead consumers, investors and regulators with false narratives”.

“It feeds a culture of climate misinformation and confusion. And leaves the door open to greenwashing,” he said.