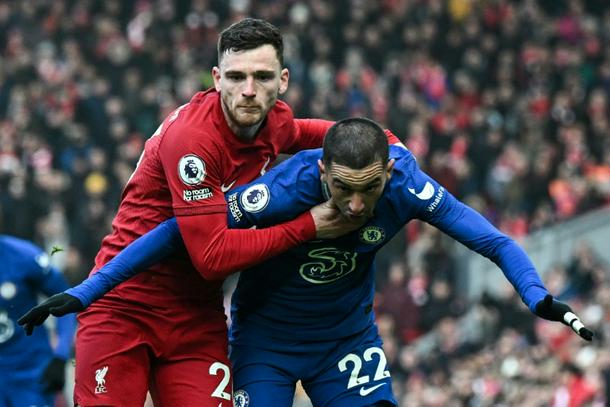 Batting to a draw: Liverpool defender Andrew Robertson (L) grapples with Chelsea midfielder Hakim Ziyech on another frustrating afternoon for both clubs

Liverpool (AFP) - Jurgen Klopp said a 0-0 draw with Chelsea on Saturday is a step in the right direction for Liverpool despite the point doing little for their chances of catching the top four.

Both sides remain nine points adrift of the Champions League places after a poor game that summed up their struggles this season.

Chelsea had a goal scored by Kai Havertz ruled out for offside early on and there were promising flashes from new 100 million euro ($108 million) signing Mykhailo Mudryk off the bench.

But the Blues remain in 10th, without an away league win since October.

Liverpool edge up to eighth, above Brentford on goal difference.

But Klopp took heart from a first Premier League clean sheet since October after a 3-0 thrashing at Brighton last weekend that he described as the worst performance of his managerial career.

“For me it is clear, in this situation you have to be ready for little steps and this was a little step today,” said Klopp after his 1,000th game in charge of Mainz, Dortmund and Liverpool.

“That’s how it is. I expect progress and I think from the last league game it was progress, definitely, and that’s important.

“I know we have to do the good things even better and longer, in an ideal world for the full 95 or 100 minutes and then we are there. We will go in that direction, I am sure.”

Klopp made sweeping changes with Fabinho, Jordan Henderson and Trent Alexander-Arnold among those left on the bench.

The change in personnel did little to ignite a drastically improved performance as the Reds were penned back in the first 45 minutes by a similarly out of sorts Chelsea.

“We wanted to win but we take the point and move forward,” said Chelsea boss Graham Potter. “I liked the energy of the team and what we tried to do.”

The visitors had the ball in the net after just three minutes when Havertz slotted in after Thiago Silva hit the post from a corner.

However, the German was ruled offside after a VAR review.

Cody Gakpo twice blazed over with Liverpool’s two best sights of goal before the break, but it was Potter’s men who came closest to breaking the deadlock when Benoit Badiashile’s header was well saved by Alisson Becker from another dangerous set-piece.

Mudryk was made to wait for his debut, but the Ukrainian’s introduction 10 minutes into the second half sparked Chelsea into life as he fired into the side-netting after some quick footwork.

“He will only get better the more he is with us, and the more we understand each other, but promising signs,” added Potter.

“He will get supporters off their seats. His dribbling action is really high and he knows where the goal is.”

Darwin Nunez’s arrival off the bench had a similar impact on the Liverpool attack, but the Uruguayan also failed to find a way through.

After a rampaging run, Nunez’s shot lacked the power to beat Kepa Arrizabalaga before he teed up Alexander-Arnold to slice Liverpool’s best chance of the game wide.

After stalemates in both last season’s League and FA Cup finals, which Liverpool won on penalties, a third consecutive meeting between the sides ended goalless.