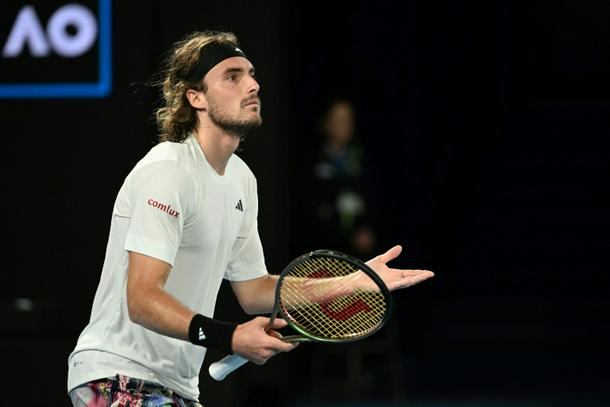 The Greek star extended his win streak this year to eight matches with a gutsy 6-4, 6-4, 3-6, 4-6, 6-3 triumph over dangerous Italian 15th seed Jannik Sinner on Rod Laver Arena as the clock ticked over four hours.

That upset put Lehecka into the last eight at a Grand Slam for the first time after being knocked out in the first round at all four majors last year.

“It was a long match, I felt like I spent an entire century on this court playing tennis,” said Tsitsipas, the highest remaining men’s seed.

“What a great night. That was superb, a ripper as they say here.

“I’m really excited to be sharing moments like this on the court, especially in Australia.”

Tsitsipas, who lost in the 2022 semi-finals to eventual runner-up Daniil Medvedev, is playing for a double prize this year – not only a maiden major title but also the number one ranking.

That will be his if he lifts the trophy in Melbourne.

Novak Djokovic, who he cannot meet before the final, can also become the world’s top-ranked player should he be crowned for a 10th time.

If neither player wins, Spain’s injured Carlos Alcaraz will keep the top spot.

Tsitsipas led Sinner 4-1 in their head-to-heads leading into the match, including victory in the Melbourne quarter-finals last year, but it proved to be tough test for the Greek.

He dropped his first sets of the tournament before fighting to victory.

He stated his intent by breaking Sinner in the first game thanks to a baseline error from the Italian.

Tsitsipas then saved four break points in the next game to keep the advantage and went on to seal the first set.

It went with serve in the second until the Greek pounced for 5-4 with a sizzling cross-court forehand then served it out in 46 minutes to take control.

But Sinner came storming back, with Tsitsipas saving six break points before finally succumbing to fall 3-1 behind and lose the set.

Sinner was fired up and constantly threatening, converting his second break point when Tsitsipas sent a forehand wide to move 2-1 clear in the fourth set.

The Greek star had no answers and it went to a fifth set.

Sinner saved three break points in the fourth game, but when Tsitsipas worked three more on his opponent’s next service game, he made no mistake.

The third seed moved 4-2 clear and ultimately got over the line for the win.