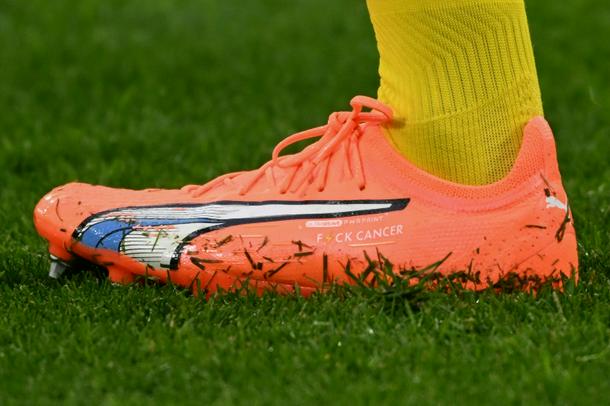 Making a statement: Dortmund's Sebastien Haller wears boots with "F*ck Cancer" written on them after he made his return to action on Sunday

Dortmund (Germany) (AFP) - Borussia Dortmund striker Sebastien Haller made his first competitive appearance since recovering from testicular cancer on Sunday, coming on in the second half against Augsburg and describing his welcome by more than 80,000 fans as “unforgettable”.

Haller came off the bench to rapturous applause, bringing the 82,000-strong crowd at Dortmund’s Signal Iduna Park to their feet.

“The welcome I received was something unbelievable, unforgettable,” Haller told German broadcaster DAZN.

The 28-year-old striker sported boots bearing the message ‘F*ck Cancer’ when he took the field.

“I was just happy to be here and to take my first steps on the pitch.

“It’s something we can take with the team, this atmosphere, we can use (it) to win games.”

Haller, who was diagnosed with testicular cancer just days after joining Dortmund in the summer of 2022, underwent several months of treatment, including four rounds of chemotherapy and two operations.

The match was Haller’s first competitive appearance since last May.

Haller, who looked sharp in his 30 minutes on the pitch, said “there are still a few things to do to reach my full fitness.”

“For the moment I’m just focused on the work. You will see in the next weeks and months how it’s going.”