Stranded Machu Picchu tourists sign a petition to be evacuated from the city of Cusco on January 20, 2023

Lima (AFP) - Peru closed its famed tourist site Machu Picchu Saturday as authorities expelled protesters from a Lima university where they have been sheltering as they wage relentless anti-government demonstrations in the capital.

Protests demanding the resignation of Peruvian President Dina Boluarte have been ongoing since early December, leaving 46 people dead and prompting the government to impose a state of emergency in violence-hit areas.

Authorities announced Saturday yet another protester had died following demonstrations in the country’s south, with the victim arriving already deceased at a local hospital in the Puno region.

Prior to the closing of Machu Picchu, rail services to the site had already been suspended due to damage to the track by demonstrators. 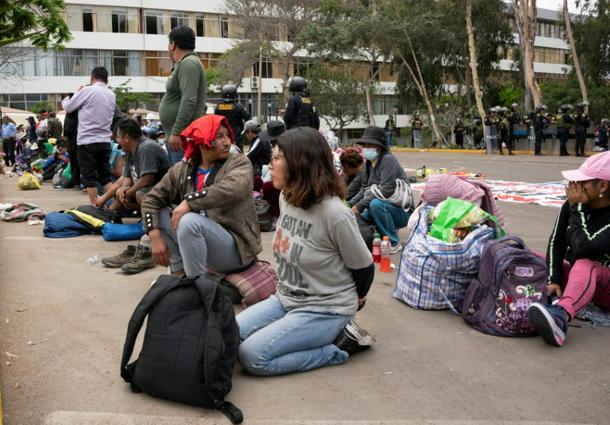 Alleged protesters wait to be transferred after arrest on the University of San Marcos campus in Lima on January 21, 2023

At least 400 people, including 300 foreigners, are stranded at the foot of the site, in the town of Aguas Calientes, and pleading to be evacuated.

“The closure of the Inca trails network and the Machu Picchu citadel has been ordered due to the social situation and to preserve the safety of visitors,” the Ministry of Culture said in a Saturday statement.

“We don’t know if a train will pick us up. All the tourists here are queuing to register” for evacuation, Chilean tourist Alem Lopez told AFP Friday.

“Some tourists have chosen to walk to Piscacucho, but that takes six hours or more and very few people can do it,” he said.

Piscacucho is the closest village to Machu Picchu connected to the roads.

In December, several hundred stranded tourists were evacuated from near the site.

Tourism is vital for Peru’s economy, representing between three to four percent of the country’s GDP. 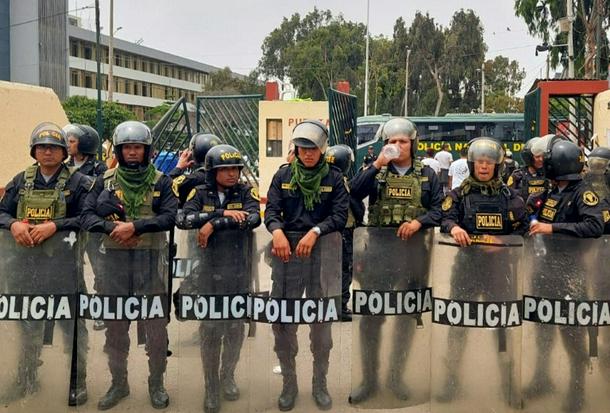 Riot police enter the University of San Marcos campus in Lima on January 21, 2023

In Lima, where two days of mass mobilization by demonstrators from the country’s poor Andean region have just concluded, the situation Saturday remained tense.

Security forces used an armored vehicle to breach the gate of the University of San Marcos in the city’s downtown, in an attempt to expel some of the protesters who have been sleeping there.

A large contingent of police searched occupants, sometimes forcing them to lie on the ground, AFP journalists observed.

Many demonstrators were detained by police.

“I have relatives who are there. I’m worried.” said Luz Maria Ramirez, 62, who came from Andahuaylas in the country’s south. “I don’t know what they’re accused of.”

Protesters are trying to keep up pressure on the Peruvian government, defying a state of emergency that now covers almost one-third of the country.

The European Union on Saturday condemned the chaos and the “very large number of casualties,” calling for a peaceful political solution in Peru.

“Peaceful social protests respecting the rule of law are legitimate in a democratic society,” the bloc said in a statement.

“The EU reiterates its condemnation of the widespread acts of violence as well as the disproportionate use of force by security forces.”

The former rural schoolteacher was removed from office and arrested on December 7 after attempting to dissolve the country’s legislature and rule by decree, amid multiple corruption investigations.

Among the 46 dead, 45 were protesters and one was a police officer.